It may be unpopular today, and even objectionable to many, for any religious group to adopt a particular confession of faith, creed or statement of faith. However, the Bastion of Truth Reformed Churches in the Philippines see a great necessity to express what they believe and what they adopt as a confession of their faith. It is easy for a certain group to say it believes the Bible or that the Bible is its only creed. The problem is that not only one group makes such claims. How many hundreds, even thousands of groups claim to believe the Bible, from cover to cover,  but who differ greatly from one another in doctrine, each claiming the Bible as their authority? The BTRC believe that many people are deceived in their doctrine, while thinking they adhere strictly to the Bible’s teachings.

The desire of the BTRC in expressing their beliefs is not due to an arrogant or elitist attitude. It is their desire to tell people what they believe the Bible teaches. They believe they adhere to the doctrines of Scripture and they believe they preach the true Gospel revealed in the Bible.

Nevertheless, Creeds or Confessions of Faith do not claim infallibility of Divine inspiration. The Bible alone is the inspired and infallible Word of God. Creeds and confessions are the fruits of the faithful labors of the Church of God to whom Christ has promised His Holy Spirit and guide her in all truth (John 16:13). They are the outcome of careful reflections on God’s Word and the result of the valiant defense of Biblical truth in times of perilous attacks by lies and heresies in the history of the Church of the Lord Jesus Christ. They do not threfore possess authority of their own. Their authority is derived solely from the Bible, the Word of God.

The BTRCs have as their official creeds the Three Forms of Unity:

The Confessions in Tagalog (Filipino):

The churches require that all office-bearers subscribe to these Reformed confessions. The BTRCs confess and proclaim the doctrines of double predestination; limited, effectual atonement; total depravity; irresistible grace; and the perseverance of the saints, as fundamental truths of the gospel of grace.

Grace, Not For All

The BTRCs reject the myth of "common grace" upheld by all Arminians and many professing yet unfaithful so-called Calvinists. This means that the BTRCs deny the notion that God works grace in the preaching of the gospel to “all” who hear its external proclamation. They hold instead that, although the gospel must be preached to all and that all must be confronted with the command to repent and believe, God is gracious in the preaching to the elect alone ("particular grace"). On this ground they reject with equal intensity the pernicious appeal of the “Well-Meant-Offer” (telling people that Christ sincerely desires the salvation, yet that salvation depends upon their willingness) in the preaching of the Gospel, which is, in actual fact, that old lie of Arminianism and a compromising Calvinist's cloak for that bolder but novel invention called “altar-call.”

The religious and practical life and the future hope of the members of the Bastion of Truth Reformed Churches are grounded upon the Biblical and Reformed doctrine of the Covenant. They understand it, not as a contract mutually agreed upon by God and men and dependent upon the fulfillment of set conditions by two parties, but as a living relationship of friendship between God in Christ and the elect church, established and maintained by the sovereign grace of God alone. They deny that faith is a “condition” to the covenant (thus, the term “unconditional covenant”), holding rather that faith, the "gift of God” (Ephesians 2:8), is the means by which God realizes His covenant, as well as the means by which the elect enjoy the covenant and willingly carry out their part in the covenant. They believe that they were eternally predestinated, created and redeemed by Jesus Christ in order to enter and enjoy that eternal covenant.

The doctrinal standards, church government and worship of the BTRCs are set forth in their Church Order. Although they believe in the priesthood of all believers (1 Peter 2:9), they firmly hold that God calls certain men (Romans 10:14, 15; 1 Timothy 3:1-13) through the church to fulfill the tasks of the distinct Biblical offices. Office-bearers (pastors [ministers of the Word], elders, and deacons) are required to subscribe to this church order. The denomination holds to the Presbyterian form of church government and presently meets regularly as a single classis. The Bastion of Truth Reformed Churches emphasize that each congregation is self-governed by a body of elders chosen out of the congregation (the "autonomy of the local congregation"). Hence, the name of the denomination—not "Church" (singular), but "Churches" (plural).  While they esteem highly the worth and ministry of women they do not allow women preachers, elders or deacons (1 Timothy 2:9-15; Titus 2:3-5).

In deepest gratitude to God for giving them such a great salvation, the Bastion of Truth Reformed Churches render unto Him the worship He deserves:

God is such a great and glorious God that He is worthy of praise all the days of their lives. God commands everyone to honor and worship Him. In obedience they strive to love Him with all their heart, mind, soul and strength and to love their neighbors as themselves. Psalm 116:12-17

God’s great holiness demands they worship Him as He has commanded in the Bible. They seek to obey God, not to earn His favor (Jesus has earned that for them already), but out of love and thankfulness for the gift of His Son. II Corinthians 9:15

God commands that Sunday be a day of rest set apart from other days. It is a day in which they can be particularly devoted to His service. On this day they gather in formal, public worship. Exodus 20:8-11

Their worship liturgy is simple, but significant. The elements of worship—prayer, singing, preaching, and giving—are taught in the Bible as belonging to worship, and therefore, they use only these elements in their worship.

Their worship services are characterized by reverence and respect for God and for His Word. Their focal point is the preaching of God’s Word, which He uses to instruct them in the truth of salvation and to call them to constant repentance and faith in Jesus Christ. In this way God strengthens them, encourages them, and helps them to know Him better. Hebrews 10:16-25

As a matter of Biblical principle the BTRCs do not offer human entertainment in their worship services. The Bastion of Truth Reformed Churches, who themselves mostly came out from Pentecostalism-Charismaticism, denounce this movemment's man-centered, entertainment-motivated (sense-stimulated) and emotion-oriented worship which now rampantly and wildly spreading in modern churches. They therefore refuse incorporating into their worship services unwarranted elements such as special (song) numbers (by adults and children), tambourine presentations, interpretative dances, choir performances, puppet presentations, drama and pantomime presentations, banner pageantries, altar call, and other abominable forms of false and idolatrous worship.  They are thankful that the Lord delivered them out of such presumptuous worship while in mercy leading them in embracing the beauty of Reformed worship which is solely regulated by the Word of God, not by the caprice and innovations of carnal men. For this reason the BTRCs practice the Biblical heritage of Psalm singing without the accompaniment of musical instruments. Habakkuk 2:20

We refer the reader to the following very useful works regarding this important subject:

A Special Exegesis of Ephesians 5:19 and Colossians 3:16 Prof. John McNaugher

Musical Instruments in the Public Worship of God Brian Schwertley

Their children are present in their worship services. They are there because they believe that their children are God’s heritage and as such must be instructed in the history and doctrines of the Bible. They believe that God works faith in them at an early age and that they, too, benefit spiritually by the preaching of the Gospel. Deuteronomy 6:6, 7

The Bastion of Truth Reformed Churches see no contradiction or inconsistency between their conviction in the truth of God's eternal predestination and their responsibility to evangelize. Evangelism for them is "preaching the Gospel" in the Church (believers) and amongst the heathen. God's eternal choice (election) of certain individuals unto salvation is not a hindrance but rather a motive and encouragement to zealous evangelism. They evangelize because the doctrine of Eternal Election assures them that they will have sure success in their endeavors. They have nothing in common with the false missionary zeal in most churches fueled by the delusion that the world (and God!) depends upon them to save as many souls as possible. The BTRCs proclaim the Gospel, confronting all with the command to repent and believe, not hoping that by men's so called "free-will" they will and can believe. Rather, the Gospel preached is God's ordained means to call His eternally chosen in Christ and compound the guilt of the reprobate in their unbelief. Therefore, whether men accept or reject their message they always succeed in their evangelistic endeavors. We refer the reader to the article "How We Evangelize."

The BTRCs condemn the pragmatic methods employed in modern day evangelism that are not consistent with the content of the true Gospel. Among these are stirring music, puppet-shows, testimonies by worldly celebrities and Sabbath-desecrating artists, performances by worldly artists, film presentations, pantomime and many various tricks and gimmicks. They reject methods of evangelism that depend on the eloquence, charisma, dynamic personality, flamboyance, persuasiveness, or enticing words of the supposed "evangelist."

The Bastion of Truth 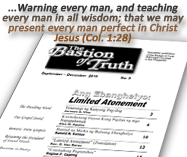 A newsletter/journal published in Filipino (Tagalog dialect) as a ministry of the denomination of Bastion of Truth Reformed Churches in the Philippines. It is primarily a means of instruction as well as a medium to proclaim and explain the convictions of the BTRC concerning the Gospel of God's sovereign particular grace in salvation.

2022 Bastion of Truth Reformed Churches in the Philippines, Inc.